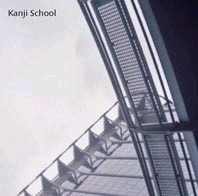 Kanji School is primarily London-based 28-year-old Dan Auty, who has spent the last few years in various bands while writing and recording his own songs at home. This self-titled release was recorded over four months in the summer of 2002, and has all of the charm that makes home recordings so cool, if you ask me.

Auty fills his cabinet with house beats while mixing in rock styles, keeping to lean arrangements; and veers off nicely into stranger territory that keeps you wondering what’s next.

You spent the last few years in various bands while writing and recording at  home; yet this album was made this summer. Did you focus on particular songs you had been working on, or were you sort of finding your way at first and then recording this?

I love playing in bands, but part of collaborating with others is that song ideas you have don’t always get realised, there isn’t enough time to record everything, and inevitably there’s going to be a degree of compromise over certain aspects.

Doing this album was a way to both record songs I’d already written but never got a chance to play with another band, and to write some new songs to a definite style. I’d always recorded things here and there at home, but this was the first time I’d actually set about recording a stand-alone album.

I found it really exciting that I could work so quickly…. there was no need to wait a couple of weeks till everyone was free to record… I could just do it on my own, whenever.

And I’m definitely going to put out a second CD, hopefully in the first third of 2003. That all said, you still can’t can’t beat the feeling of playing in a band when it really works.

Describe your sound. Where do you find inspiration, say, for your beats?

I like to call my sound ‘rootsy scuzz pop’, and influences tend to be whatever I’ve been listening to that week.

In the case of this album, it was Wilco’s ‘Yankee Hotel Foxtrot’, The Flaming Lips’ ‘Yoshimi Vs The Pink Robots’, the final Whiskeytown album, plus DJ Shadow’s ‘Private Press’. I guess the influence of the latter album isn’t that obvious, but the samples and hip hop beats used on a few songs definitely come from him.

I’m very influenced by American music, especially alt.country/country rock bands like The Jayhawks, Lambchop, Ryan Adams and Gram Parsons, but I am also aware that I’m just a guy from England, so don’t want to come across some phoney country musician who has in fact never been anywhere near a desert!

So although most of the songs are based around acoustic guitar with harmonica and piano thrown in here and there, I like to mess things up with distorted bass, weird strings and snaches of movie dialogue.

And the new stuff I’m working on is a lot more electric and raw sounding.

Do you plan to work this material into a live set, either with your current band or solo?

Some of these songs are definitely going to get a live airing next year. I keep toying with the idea of doing some solo shows as Kanji School, but for the time being I think I’ll be performing them with my most regular other band, The Shorty Blackwells.

We’ve got a new CD out early in 2003 so we’ll be gigging again, and hopefully a few Kanji School songs will make their way into the set. I’m really excited about playing them in front of people.

What’s the biggest difficulty you face in getting your music into people’s ears?

The biggest difficulty is just getting people to visit the website or click on the sound samples. The internet has made it much easier for musicians to promote their music, but the result is that there are literally thousands and thousands of bands out there all vying for attention. Unless you’re touring extensively or getting played on the radio it’s hard to get your name known.

But the fact does remain that websites like Gajoob are visited by hundreds of people every week, and with a site like CD Baby doing a fantastic job of selling indie CDs to the world, I do believe it’s possible to get your music heard by a decent audience.

I’m never going to make a living out of this, but that’s not why I’m doing it.

After posting this review and interview from November 2002 I was searching the web for more information about what Dan had been up to since then. Unfortunately, he last a battle with cancer in sometime this year… Hats off to Dan.

This news comes via Aiden of The Shorty Blackwells who were featured in the first (and only) print issue of Homemade Music back in 1999. See their Facebook page for more information.

Continue Reading
link to What Is a Producer Tag? How-to Tips and Ideas

If you're a producer looking for ways to make your mark on a song, one of the best things you can do is create a producer tag. Producer tags are short, recognizable audio clips that help listeners...