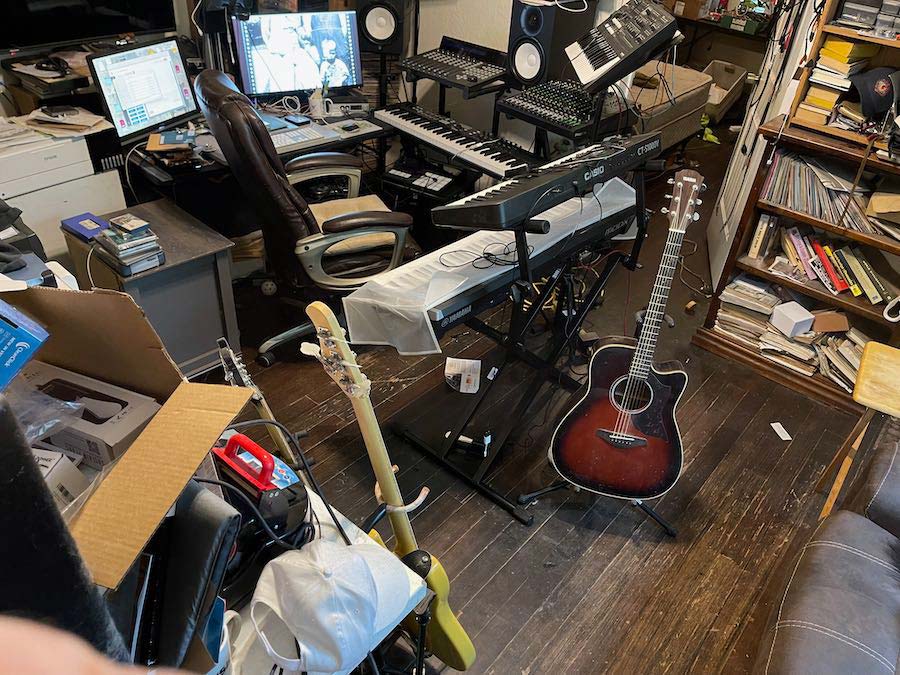 Since my daughter moved out I’ve been arranging my recording studio in my little duplex apartment.

I rented out a storage unit to house and organize all the cassettes, CD’s, zines and other things sent to me for review in GAJOOB. It’s a lot, and freeing up that space allows me to work toward an environment where recording isn’t such an obstacle course.

I also thought a long time about when recording was something I did in much of my free time. It was around 2003 and at that time I lived in a small house and the studio was in an area just off the kitchen where I think a normal person would have a dining table. I had a drum set, etc.

I also did a lot of recording in a split level house where the studio was in my bedroom which was large enough to fit the drums and a prominent studio desk my brother made quite comfortably.

It’s essential to create an inviting space where you naturally want to go to whenever inspiration strikes or, really, where you just go as a matter of course as a regular part of your life. As in, this is what I do when I get home from work after I take care of the dog and cat.

So along these lines, I’ve moved my bed into the back room and moved the studio into the former bedroom. It’s a tight squeeze, but I think even after adding an Akai Force to the workflow arrangement, it’s getting closer to luring back in on a regular basis, on a default basis.

I’ll be covering the following topics:

Review Kanji School is primarily London-based 28-year-old Dan Auty, who has spent the last few years in various bands while writing and recording his own songs at home. This self-titled release...